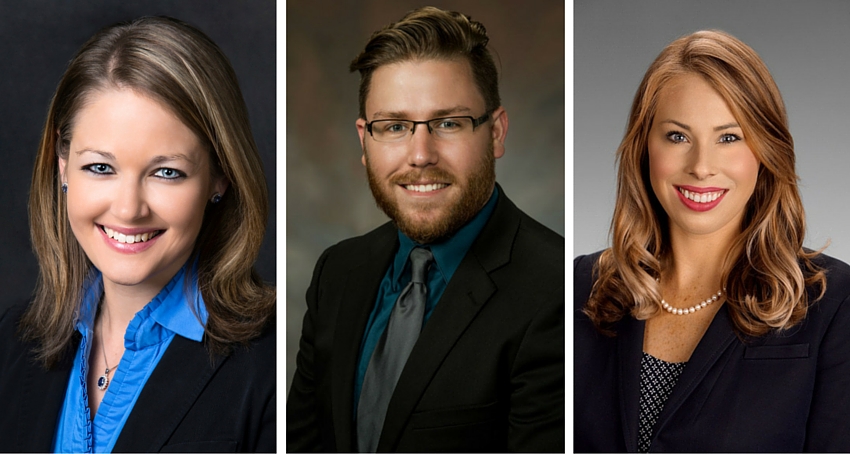 Congratulations to our Community Service Award, sponsored by Davis-Moore Auto Group, finalists! They include: Amanda Brown, Cargill; Thomas Dalton, Textron Aviation and Jade Marie Martin, Klenda Austerman LLC. The Community Service Award is presented to a YPW member who is distinguished by their record of service to their community. They have engaged in continuing efforts to preserve and promote Wichita through their time, service, and talents.. Learn a little more about our finalists below. 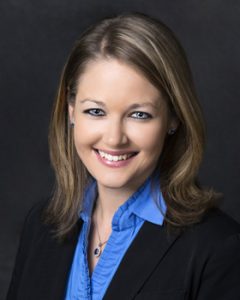 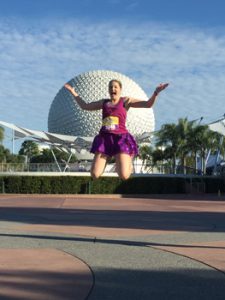 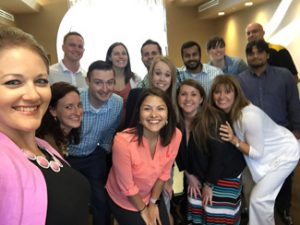 What has been your favorite YPW experience?
One of the first YPW events I had the pleasure of attending was the sailing event just a few days after I moved to Wichita in 2014. Being a Minnesota girl, there was no better way to embrace Wichita’s sunshine filled summer than on private boat in Lake Cheney. The kindness of those in the sailing club was overwhelming and the friendships created from the event made a lasting impression of YPW, fueling my passion for the organization.

What is your favorite app and why?
Hands down my favorite iPhone app is what I like to call my online scrapbook, Facebook. Being that I travel a fair amount for work, I enjoy documenting my adventures on Facebook through posting a five photo collage. Having lived in five states in ten years, Facebook allows me to share updates with a broader amount of people while staying in touch with those who I am not able to talk to or see as frequently. Although, Facebook’s other draw is the ability to see what is happening in Wichita and keep my calendar action packed with local flair.

What was your favorite college memory?
With tears still fresh in my eyes after watching my parents walk out of Seattle Pacific University’s Hill Hall, all the freshmen of the residence hall were summoned to the main lobby. Knowing no one but a random roommate who had filled our room with 50 some beanie babies, the shear fear of an introverted Minnesotan set in. All the women were instructed to take off one of their shoes, of course I was now regretting the simple flats I had chosen to wear, and throw them into a pile in a middle. The boys were then told to grab a shoe, find their owner and go on a date to Seattle’s iconic burger joint Dick’s, where ketchup costs extra. For the first 15 minutes my date said nothing, it was at that defining moment that I decided to take charge and lead the conversation…never again would anyone ever believe I was an introvert. Dickerellas is a Hill Hall tradition during freshman orientation that lives on today, welcoming new students to the adventures that lie ahead.

What is your number one restaurant recommendation in Wichita?
One must complete a food tour of Wichita to appreciate the variety of tastes the city has to offer. To start the day off, there is no better breakfast spot than Doo-dah Diner with their scrumptious Banana Bread French Toast. For lunch there is no denying a trip to the ICT Pop-Up Park for a plethora of delicious flavors from our local food trucks. A classic stop after work on a Friday is Central Standard Brewing for their Reggae Rita or Red Sangria! Being a burger scientist, I would be remised to mention the Haystack Burger at Anchor for dinner. To top the day off the best dessert in Wichita is hands down Monarch’s scrumptious Brookie (a brownie with a cookie middle) topped with vanilla ice cream and a decadent bourbon sauce.

What is the most recent book you’ve read? What did you like/learn from it?
As part of my current masters of food science program, I read “Poisoned” by Jeff Benedict. Being a true nerd, read this book in less than 24 hours as the non-fiction plot of the Jack in the Box E. coli outbreak unfolded page by page. The captivating narrative highlights the importance of food safety on all levels and the critical role a food scientist as myself plays. A bit of trivia, from this outbreak the HACCP program was created that is still an industry standard today. #sciencenerd 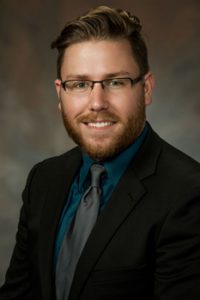 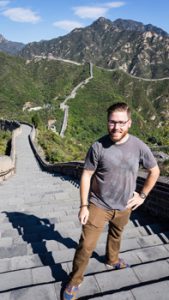 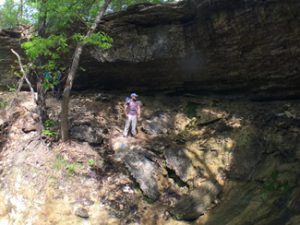 What was your first job?
My first real job as a kid was working at Shell gas station as cashier and grounds-keeper, which was a glorified title for janitor. It was a minimum wage and hard, often gross, job that I worked Saturdays during high school. As tough as it was, it taught me the value of a good days work.

What has been your favorite YPW experience?
W(h)ine About Wichita… I’m probably pretty biased about it, but it was such a successful event. It brought together YPW members and non-members, leaders in local government and the community, showcased the amazing Union Station, and featured fantastic wines from Wheat State Wine Co. At the end of the night there had been great conversations and a lot of valuable data gathered.

What is the most recent book you’ve read? What did you like/learn from it?
One of the most recent books I’ve read is “Use of Weapons” by Iain M. Banks. It’s a sci-fi novel that takes part in his Culture series; and one of the things I like most about it is that there is an absolutely mind-screw of a twist in the very last paragraph of the 350+ page book that completely forces a rethinking of the entire thing.

Where would you like to go on a dream vacation?
Hike the Laugarvegur Track in Iceland. 7 day, 56 mile backpacking trek through some of the most beautiful and imposing environments on the planet. It would require hiking through volcanic ranges, glaciers, black sand deserts, always dealing with weather that can change from sunshine, to rain, to snow in a matter of minutes.

If someone were to ride in your car, what would they hear?
Lately I’ve been on a bit of a Queens of the Stone Age kick (“Songs For the Deaf” is just about a perfect album). But if I were to put on my favorites playlist, there would be a wide range from synthwave to soundtrack music. A passenger might want to hold on when a Mad Max: Road Fury soundtrack piece gets queued up. 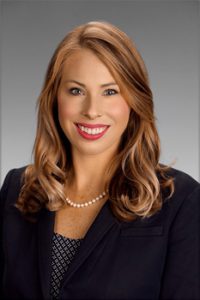 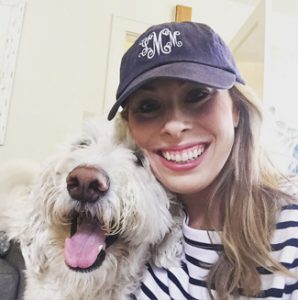 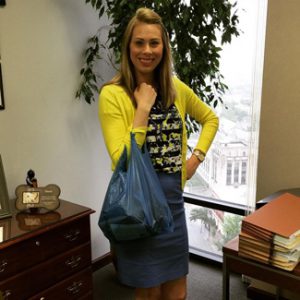 If someone were to ride in your car, what would they hear?
Silence! I generally drive in silence reflecting on my day and thinking about what I accomplished, or still need to get done. If my dog is in the car you’ll also hear me talking to him. It’s weird, I know.

What is your favorite app and why?
My favorite app is Instagram. I love that it allows people across the world to connect in a way that promotes beauty and art. Instagram allows each person to share what they find fascinating, and share what they find unique and inspiring. Each post is a small piece of art adding to the global collective and history. I also love seeing the cross-cultural and global connections we can make by searching a simple hashtag, and finding thousands of other people who have had the same or similar thought. Additionally, I love that it allows my family to connect through a visual medium. My aunts and uncles, parents, siblings, and even grandparents use the app, so it allows our family to stay in touch through immediate means, and lets me see what my extended family is up to!

What has been your favorite YPW experience?
My favorite YPW experience was my first experience volunteering with Enhance. The project that year was located in the Delano district. I was running late (Saturday mornings come really quick!) and was arriving about an hour after the project had started. I had no idea what to expect–only that we would be working on updating and enhancing houses. As I was driving through the neighborhood to check in I saw tons of volunteers all in gray shirts (who had arrived on time, obviously) hauling trash, painting houses, digging up landscaping beds, and generally working their tails off. I checked in and was assigned to Chad Glenn’s team which was charged with revitalizing the Downtown Senior Center’s courtyard. After working all morning and into the early afternoon we had completely changed the courtyard. It had landscaping and grass and had installed a little free library. I was honestly blown away by the experience and blown away by all of the volunteers and the changes and difference we
made. As I was driving home after working that day covered in dirt and sweat I realized that I was proud to be a member of YPW.

This experience showed me that our organization was more than mingles and social events. It showed me that there were scores of YPW members who were willing to get up early on a Saturday, most likely foregoing their own chores and day to sleep in, to help those individuals who are incapable of doing work on their own homes. It inspired me to join the Enhance committee and give me time to help the project in the future.

What was your favorite college memory?
I went to the University of Kansas from 2005-2009. During that time we not only won an Orange Bowl, we also won the NCAA National Championship in basketball in 2008 (if you didn’t know, I mean, some people might like to block the greatest moment in recent Kansas Sports history from their mind, I get it!)!

I will never forget watching the championship game. We were down to the wire in regulation. I have my head in my hands, I’ve probably been crying (I was) and I am sure we are going to lose this game to Memphis and evil Coach Calipari. Then it happens. Mario Chalmers nails “the shot.” We go into overtime. We all lose our minds. KU, of course, win the game. It feels like the entire city of Lawrence takes a huge breath and for a mili-moment it’s completely silent. Then all hell breaks loose. People are hooting and chanting and cheering and hollering and there is a mass exodus down to Mass Street. Thousands of people are partying in the streets. There are families with small children, and students, and the elderly. We are all having an absolute blast and celebrating our teams victory. Everyone is getting along and there are no riots nor disorderly conduct, Everyone is singing the alma mater and yelling the Rock Chalk Chant and high-fiving and hugging and just generally bursting with school
pride. It will hands down be one of my favorite memories of ALL TIME. Rock Chalk Jayhawk!

What is the most recent book you’ve read? What did you like/learn from it?
I recently finished “The Martian” by Andy Weir. I learned that I hope I never get stranded on Mars, because I would die within the first week (if not the first 24 hours) of being alone. I learned that my science knowledge is severely lacking and it’s probably a good thing space travel was never high on my priority list. Other than that it was a fascinating read and led me to respect science-minded (and trained) people more than I already did. It’s obviously a science fiction account of space travel to Mars (and thus is a little far-fetched), but the way the book tracked, and the explanation behind the science was pretty fascinating and a good read!

Find out what YPW member will win the Community Service Award at Founders’ Day on July 29 at Mid-America All-Indian Center.

Thank you to Davis-Moore Auto Group for sponsoring the Community Service Award. 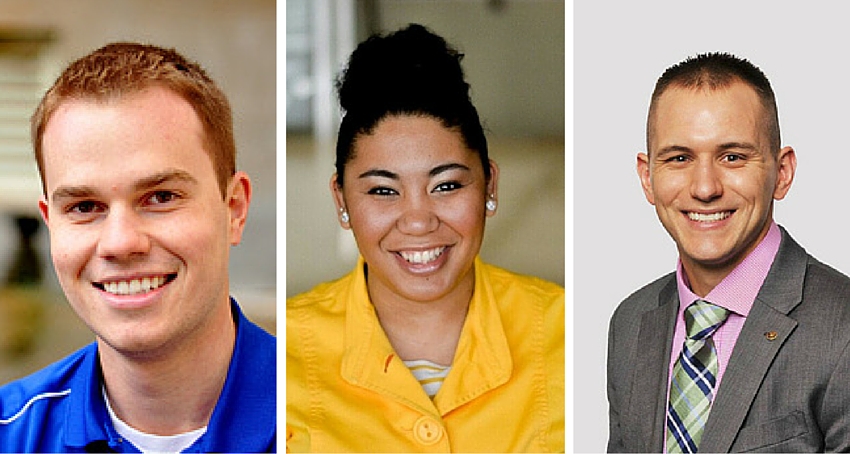