What We Learned: Whine About Wichita

April 1st, or April Fool’s Day, is generally known as a day when people make jokes, play pranks, and generally fool around for no better purpose than to tickle their funny bone. But when 119 YPs, City of Wichita officials, and members of the community enjoyed wine tastings from Wheat State Wine Co. at Wichita’s historic Union Station, the irreverent and jocular event had an important purpose. 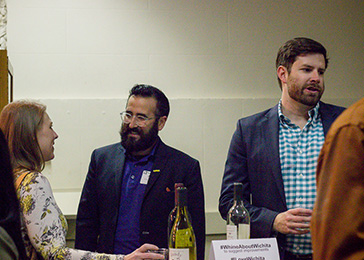 W(h)ine about Wichita was a unique event to bring together YPs so they could discuss the things about Wichita they didn’t like (Whines), but also proclaim the things they do like and wanted to celebrate (Toasts). These Whines and Toasts will help guide YPW’s advocacy efforts in the future, with the goal of helping promote and make positive change in Wichita.

At the end of the night, we collected 78 Whines and 79 Toasts. Comments fell into primarily nine categories: Arts, Careers, Culture, Infrastructure, Outdoors, People, Perception, Restaurants, and Retail. Infrastructure and Retail received the most Whines; Culture and Perception, the most Toasts.

What are our next steps in utilizing the information gathered? The comments gathered during the event, coupled with comments gathered from the 2015 YPW Survey, presented a treasure trove of raw data that we can begin to work on. 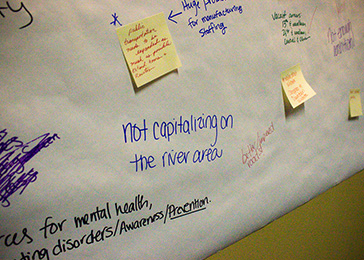 First we will combine and distill the survey and W(h)ine data down into 15-30 core actionable items so that we can assess their feasibility and alignment with the YPW mission. Organization leadership will review the findings, and develop a plan for future organization-based action. We will also make the findings available to other community organizations who can also find initiatives to explore.

W(h)ine about Wichita was a very fun first step in creating targeted positive change in Wichita by YPW. The next steps are still in process and will require dedicated people who want to see Wichita improve. I invite you to join me at the next YPW Community Action Forum on May 23, from 6-7 p.m. at the Wichita Metro Chamber of Commerce.